And Then Suddenly The Tide Came In ... 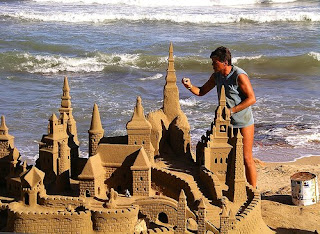 An update on Singapore's casino projects:

Mr Sheldon Adelson, chairman and chief executive officer of Las Vegas Sands, said: 'In the light of recent turmoil in the global markets, I felt the need to personally reaffirm our commitment to the success of Marina Bay Sands. I am pleased to say that the Singapore Government's support of our project remains strong.'

The statement from Las Vegas Sands did not specify whom Mr Adelson had met.

But the consensus among analysts is that if the project were in trouble, the Government would intervene ....

Yes, I think so too. The government has pinned so many of its hopes on the IR projects that it surely wouldn't allow the projects to fail. But it sure would be interesting if we knew what was being discussed behind closed doors. My guess is that in the ultimate worst-case scenario, Temasek Holdings would appear as the gallant white knight, perform its national service and pump in money to save the struggling project.

Even if the Sands project does go ahead successfully and completes on time, one major difficulty is that the tourism and gaming industries are "good times" industries. In bad times, people save their money for the essentials. Holidays and casinos are not essentials.

Which means that if the world heads into a really bad economic patch in the next few years, the IR projects can do little to help Singapore. Few tourists would come and even fewer tourists would gamble.

Sands' reassurances over the future of the Marina IR follows fresh doubts raised by its auditors about the company's ability to continue operating.

In a regulatory filing on Thursday to the United States Securities and Exchange Commission, PricewaterhouseCoopers said the casino operator, which has US$8.8 billion (S$13 billion) in long-term debt at the end of June, would not be able to meet lenders' requirements unless it cuts spending on developments, boosts earnings at its casinos on the Las Vegas strip and raises more capital.

It was also said to be relooking projects under way in Las Vegas, Pennsylvania, Macau and Singapore.

Las Vegas gaming analyst Bill Eadington said the company has lost over 90 per cent of its stock value in 13 months. Flying that close to bottom, the very existence of the company is in question, not just one of its developments, he added.

And that is scary. Especially because of the extent to which the company has borrowed from our three local banks (see below). They would be very badly hit, if the project were to fail.

The Singapore authorities have so far declined to say more. When contacted, the Singapore Tourism Board would only refer to its earlier comment that it was 'in talks' to 'facilitate the success' of the development.

Singapore's banks, OCBC, UOB and DBS, which have significant exposure as lead arrangers for the project, remained optimistic.

About half of the $5.4 billion credit facility for Marina Bay Sands has already been drawn upon, according to UOB Kay Hian's latest report.

OCBC chief executive officer David Conner said the loan is 'ring-fenced' with no exposure to the company's projects in Las Vegas or Macau.

This means, of course, that it is essential for the project to succeed in getting up and running. If the project stalls halfway, then the banks would lose big money.

Our PAP govt will definitely not allow the project to fail. To lose face is the last thing that they will allow it to happen.

Although they have said that they will not use our public funds for such a project, I predict that they will pump in more of our CPF funds or even reserves if necessary to help it survive. Afterall, they can always give the excuse that we need the gambling revenue to create more jobs for our people.

If the project fails, our Spore govt will be made the greatest laughing stock of the year. So what do to ?

On the contrary, I really hope the project fails and everything goes bust.

It'd be a good shock to the system, both political and otherwise, for the ensuing chaos might see a phoenix arise from the ashes in terms of a change in the political leadership.

That's an ideal and worse things could happen. But I have faith in Singapore and Singaporeans.

without the tourists, we can tap on the locals to fill up the gambling hall

I agree with mr.udders. The establishment's natural instinct is to save the project, at all costs. While I would not foresee chaos if the project fails, it will be a good test on the system. What doesn't kill the system, will make the system stronger, no? Bring it on!

Would it be possible to complete the project in stages?

Given the recession and tourism slowdown, there's no need to complete everything at the same time.

I find it strange that there's no news on the 2nd IR at all. I would think that people would ask whether Genting is able to complete the project.

No news could mean that no one asked, or that it's better to be left unanswered for now.

As we've been reminded time and again by our acutely insightful and wise MM (who is never wrong), S'pore's investments take the loooong view, 20-30 years I believe he said. Surely our economic conservatism cannot possibly fail given that time horizon, right?

Doesn't this smell like a reverse-Suzhou fiasco? (i.e. instead of knocking on an overseas door to get screwed, we invite an overseas company to come screw us)

a) Marina IR couldn't have drawn down all it's loans; in any case, there were abt 40 banks involved

b) If Adelson can't see the project thru and have to hand it back to the S'pore Govt, it may be a great chance for SGX to offer it a listing. That way, S'poreans can get direct exposure to our very own casino instead of buying proxies like Genting.

I wish all your postings and some of your visitors aren't always hell-bent on knocking S'pore, thank you.

Your own insane psychological projections, my dear Lucy.

Personally I would be most pleased if the IR projects completed smoothly and the banks suffered no losses.

Great writeup on Singapore. I love the place too, especially its local food. Though it can be abit too spicy at times. Thats singapore tourism for you. =)

Those who are of a biblical or cynical (or both) bent will remember the admonition against building a house on Sands. Or a casino on debt, for that matter.

Sure build it up - but who is coming??

Ah, I must have sparked you off, with my metaphorical choice of title & picture.

Very apt picture - Sands castle about to be swept away by the financial tsunami...

yes and I was also reminded that the casinos had run out of sand a few months ago and were using granite dust as a sand substitute ... but you can't find a substitute for cash!