Two Duds on a Friday Morning

Where was I, at that time?

Up on a hilly park called Nam-San, somewhere in Seoul. My Korean colleagues had assured me that this was the peak of cherry blossom seasons, and that here at Nam-San, I should be able to see some really pretty sights like this:

So, two colleagues and I had gotten up extra early, left our respective hotels and taken a cab to Nam-San that morning. We saw plenty of cherry blossom trees, but unfortunately no blossoms. Except for one single cherry blossom tree in full bloom (this tree must have been either clueless or rebellious by nature), all the trees were leafless and flowerless. The winter had been too cold, and the blossom season was delayed.

So we took a little walk around the park anyway, although now it wasn't that much fun. And then suddenly, my colleague got a news alert on her Blackberry, stating that North Korea had just launched its rocket. It was just a one-liner news alert. She got a little nervous and said that maybe we ought to head back now.

I was thinking to myself that this wasn't much of a game plan. If a rocket were to hit Seoul (I know that isn't supposed to be North Korea's game plan at this time, but then you have some crazy people up there), it probably wouldn't make much difference whether you were in a park, or back in the hotel or office. It would be a bloody mess anyway.

Later we learned that the North Korea launch that Friday morning was just like the Nam-San cherry blossoms. The missile did take off, but it didn't quite work. A short time after take-off, it proceeded to break up and crash harmlessly. So that was another dud, and a clear indication that North Korea's missile technology is still a long way off from posing any real long-range nuclear threat. At the least, in the words of one expert observer here - "It certainly degrades that threat considerably."

Internationally, North Korea's rocket-related behaviour had caused (and is still causing) a lot of international consternation and worry, receiving plenty of attention at the U.N level and also from the U.S. and China. But how do the South Koreans themselves feel about the matter? One might imagine that the South Koreans should be the most worried people of all. After all, North and South are enemies, and if the North actually had missiles that worked, the South would be their most obvious target.

If you talk to the South Koreans though, you'd see that they don't care that much. They have lived with their crazy neighbour up north for so many decades that by now, they have grown somewhat numb to the whole situation. Life has to go on, and it does, for the South Koreans, who have no intention of postponing their usual lives and activities to get all worried and upset, every time North Korea says or does something about missiles and rockets.

Over lunch that same day, a Korean lawyer remarked to me that the blase-ness with which most South Korean citizens view the North Korean threat is perhaps not that healthy. She said, "Perhaps we have grown too complacent,. We have become used to the threat, but now perhaps we might be forgetting that the threat is actually real."

But a short time later, as we were still talking about the failed missile launch, she laughed loudly over her kimchi and said, "I knew that was going to happen. I already told all my friends - that rocket is going to crash or stall or  explode right after take-off, or something. The North Koreans - they can't get anything right."

In other words, a dud.
4 comments:

Show and Tell in Korea 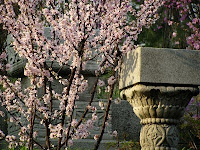 Flying off to Seoul tomorrow, on a working trip. Hopefully, it is cherry blossom season. It's also the time for North Korea's rocket testing - sigh, occupational hazard. Keeping my fingers crossed.

I'm headed to Korea to conduct training. I have half a day  to talk to my colleagues there about some new laws in the U.S., the EU and Korea itself - laws which will greatly change the way they do business and run their operations.

My daughter asked me why I am going to Korea. I told her that I am going there to do a "show & tell". That is perhaps the easiest way to explain to her the purpose of my trip. "Show and tell" is something that she herself has had to do several times in school.

In primary school, "show and tell" means that the student picks a topic, brings the relevant object to class and gives a speech in class. She might, for instance, bring a photo, a toy, a favourite book, or a holiday souvenir and tell the class about it - what it is; where she got it from; what's unusual or special about it etc. In a more advanced version of "show and tell" (like the one my son - an older child - had to do recently), the student might be asked to use Powerpoint slides.

If you look carefully at "show & tell", you'll see that it calls for several different skills. Among other things, it requires voice projection; linguistic ability and the confidence to speak before an audience. But the child also needs to find ways to make her speech engaging to her audience. She has to think of interesting things to say; she may have to do some research about her topic, and find a logical way to present her points. She may want to try little ways to polish up her speech, for example, say, by posing a question or telling a little joke or using an appropriate hand gesture at certain times.

"Show & tell" is an important thing to learn. In adult life, "show & tell" has practical applications when you have to interview for a job; pitch for a sale; conduct training; present a business proposal; or explain a product, policy or procedure to your colleagues. In fact, every teacher who needs to stand before a class and teach a topic - whether it is science, math, geography or biology - is also doing a "show & tell".

One problem for adult Singaporeans today is that they never did "show & tell" when they were kids (well, my generation didn't, at any rate). It just wasn't part of the school programme back then. "Show & tell", I think, is a relatively new phenomenon in Singapore schools. Traditionally, we have emphasised rote learning and memory work and easily gradeable forms of assessments (such as MCQs), over less-structured and more "free-form" types of schooling, such as show-&-tell.

What's the consequence? Well, I can only make some anecdotal observations. In a country where there are ever-increasing numbers of foreigners, it seems to me that nowadays, it's common for Singaporeans' contributions to be undervalued in the workplace. I see situations like this quite often - the Singaporean does most of the hard work, he has a strong sense of responsibility and his work is technically sound and reliable. But somehow he doesn't get the credit. Instead some FT waltzes in and takes the limelight. And the FT is usually someone who is more articulate and outspoken (basically, a better show-&-teller).

Hence locally, we often hear the observation that ang mo's are NATO ("no action, talk only"). I don't think that this is entirely fair - because I certainly know a few ang mo FT's who are very good at getting things done. However, I do also think that:

(2) the average angmo is generally much more articulate than the average Singaporean (especially when it comes to talking about one's own work accomplishments).

It's because of the communication factor that the angmo leaves a much stronger impression than the Singaporean at the workplace. The angmo came from a different background - one where he was, from an early age, much more encouraged to speak up, state an opinion, communicate clearly and express himself. In contrast, the Singaporean was expected to just shut up and get his homework done.

The consequence today? The quiet, hardworking Singaporean may end up getting few marks for the plenty of work that he has done (because in the workplace, there are no exams, and if there are no exams, you will not be assessed on your grades, but only on what people know you have done - and not what you have actually done).

Meanwhile the louder, more articulate angmo gets full marks for the relatively little work that he has done. Because whatever he has actually done, he is much more able, due to his communication skills, to make it known to his bosses or supervisors, and to present it in the best possible light.

So the angmo gets ahead; and the Singaporean gets overlooked. That's one reason why Singaporeans are losing out in their own country.
19 comments: