A Singaporean in Shanghai

I am more like the average woman. When I look back on my career, I realise that there have been more than a few occasions when I "self-disqualified" myself from a new career role, because I had felt that I lacked some necessary skill or ability.

One of those skills/abilities has been my Chinese language proficiency. I speak Chinese well enough, for everyday purposes. However, I am in the legal profession. My work involves analysing laws and drafting legal contracts. This kind of work calls for higher language standards. You don't merely have to read the small print - you need to be able to write it too. I have that kind of proficiency in the English language, but I've not felt that my command of Chinese was sufficiently strong. 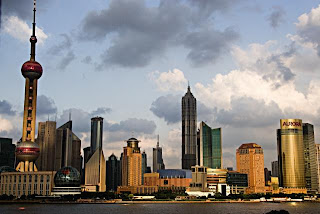 I've just returned from a business trip to Shanghai. This was my first time there. The business and financial district of Shanghai looks extremely modern and developed. The place reeks of consumerism and wealth. You can tell from the number of luxury cars whizzing by on the roads, and also the types of shops that line the streets. Gucci, Cartier, Apple, Louis Vuitton, the Ritz Carlton and the like.

To prepare for this trip, I had brushed up on my Chinese language. This trip was an important one from a work perspective. So I took the trouble to learn various technical terms in Chinese that are relevant to my type of work. For example, credit risk management (信用风险管理）, interest rate swaps （利率互换）, clearing house （清算所）, events of default （违约事件）, regulatory requirements (监管要求） and risk exposure limits (风险敞口险额）.

In the two weeks before my business trip, I had set the target of learning 5 to 10 technical phrases per day. By the time I stepped foot on the plane to Shanghai, I had mastered about 80 such terms and phrases. At my meetings in Shanghai, I was pleased to find that this newly-expanded Chinese vocabulary of mine comfortably got me through.

Now, looking back on my school days, I wonder why Chinese had seemed so difficult back then, whereas the learning seemed relatively quick and painless this time round. Then the answer struck me. But of course. Here I was learning for a specific purpose - I knew why I wanted to learn, and what I had to use the learning for. I needed to know how to say the things that I needed to say.

Whereas in school, Chinese had been difficult because it didn't seem to have any purpose, beyond exams and tests. 默写，in particular, had seemed quite pointless - you basically had to memorise long sentences and regurgitate them for the sake of scoring marks.

My daughter had long wanted to have a pet. Cat, dog, hamster, whatever - she wasn't fussy, as long as she got a pet. Back in March, during the school holidays, I finally relented. We went to several pet shops, looked at many different animals and after a lot of hemming and hawing, decided to get two rabbits.

I gave clear instructions to the shop assistant that we wanted two rabbits of the same gender. Both could be male, or both could be female. The main thing was that I didn't want the pair to be able to make new baby bunnies.

The pet shop assistant helped us to pick two rabbits. She assured me that they were male. This wasn't obvious to me, as both rabbits were still young and sexually immature and their private parts were small (and furthermore, all covered up in fur). But I trusted the shop assistant.

Back home, we put both rabbits in the same cage. Soft, cuddly and cute, both were also very happy to be carried around in our arms like a newborn baby. Everyone in the family loved the two new pets. We named them Blackie and Chocolate.

Then one day, Blackie bit my maid Neslie.

It was quite a bad bite. Small but deep. I saw the drops of blood, falling one by one, from Neslie's finger, onto the floor. I was shocked. Up to then, both rabbits had always been very docile and gentle.

I asked Neslie what had happened. She said that she had seen the rabbits having sex. Neslie knew that I didn't want any rabbit pregnancies, so she tried to catch Blackie and carry him off Chocolate. Evidently, Blackie got angry and proceeded to bite. Or so Neslie claimed.

"But that can't be right, Neslie," I said. "They couldn't have been having sex. Both are male. The woman at the pet shop said so."

But the next day, I saw it with my own eyes. Blackie had clambered on top of Chocolate again, and was excitedly wiggling his rear end in an unmistakeable manner. I got scared. Two pet rabbits is fine with me, add another six or seven babies and that's just too many for me.

I quickly got another cage. I separated Blackie and Chocolate. I was thinking that the pet shop assistant must have made a mistake, and that Chocolate was actually female. In fact, I felt rather annoyed with the shop assistant for causing us all this extra trouble.

Months have passed. I now know that the pet shop assistant had not made a mistake.

Both Blackie and Chocolate have reached adulthood. Their reproductive organs have become quite  conspicuous. In particular, it's become clear that Chocolate definitely has testicles, just like Blackie.

We still keep the rabbits in separate cages. They have grown bigger, so they do need the extra space. But sometimes we put the two rabbits together to play. During many of those times, Blackie still goes after Chocolate. It is definitely a sexual thing, not just  playing or fighting. For we can see that Blackie gets an erection.

So I guess that Blackie's sexual orientation should not be that surprising and is perhaps not that uncommon.

Nevertheless, I still feel that Blackie is pretty special. A gay rabbit! Fancy that. It makes my children laugh, just to talk about it.

I just wonder what a fundamentalist Christian would say about this whole matter.
30 comments: