Here's an email from Xian Jie, one of my readers. He is a documentary filmmaker and his latest project, supported by the Lien Foundation, aims to raise awareness about dementia.

I have been following your blog for a couple of years now and thought about letting you know about Before We Forget, a campaign I'm working on with a couple of friends to foster conversations about dementia.

We have been working on a documentary and following two families for close to a year; this documentary will be released in September alongside 2 exhibitions. Right now we have launched this website - Before We Forget - to encourage Singaporeans to share their stories. We have also started a Photo Challenge.

You don't need to personally know anyone with dementia to contribute. You could share your thoughts about dementia, ageing, forgetting, and dying in the form of short stories or poems. Every story that is shared goes a long way to de-stigmatise and humanise dementia. It would be fantastic if you could let your blog readers and Facebook friends know about Before We Forget ....

Dementia is a disease most commonly seen among old people. It's also commonly referred to as senility. The person's memory, attention and language and problem-solving abilities can all be affected. Badly affected persons may become so disoriented that they do not know what day of the week it is, or where they are, or who they are. They can fail to recognise their own caregivers and loved ones.

Do check out the links above, for more information. The organisers are also planning to organise two exhibitions (one at VivoCity and the other at the National Library) to raise public awareness about dementia. 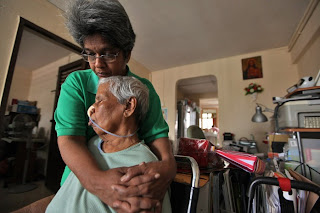 My grandmother had dementia, in the last few years of her life. I was a kid then. I still remember clearly how emotionally and physically exhausting it was for my family to care for her, in those days.

By then she was already bed-ridden. My grandmother would have a meal (or a bath), and then an hour later, she would have completely forgotten that she had already had her meal (or her bath). And she would moan in agony, saying things like how come we didn't love her anymore and wouldn't let her eat nor bathe for days.

One thing she constantly worried about was who would care for her beloved garden, after she died. To give her the comfort and reassurance that her garden would be okay, I took over the regular gardening duties. To me, looking after the garden felt like something that I could do, to help her die more peacefully.

Here is a poem I wrote about those days. This poem appears in my book Two Baby Hands, and was also previously published in Singa, a now-defunct publication of the NUS Centre for the Fine Arts.

In later years, she sat here rarely. Most of the time,
she lay on her bed in a darkened room where
the air was musty and sunlight never shone.

As well as I could, I kept it growing
for her. She could no longer do it for herself.
Yet her life was linked to this place.

I watered her orchids of golden shower,
unchoked her potted plants from weeds. With a stone
I crushed the life from snails and fed them
to the earth. After storms, I helped fallen shrubs
to climb to light again.

Sometimes a sunbird would come to sip nectar
from my grandmother's flowers, and every New Year
the kumquat branches would fill with orange fruit.
In the years that passed, not a single bonsai died.
A tree can live forever.

She would go more easily, I sensed,
if she knew that the life here would endure,
long after she herself had left.

That was a simple yet effective poem (I think). Much later I looked back and explored my memories of those days, and produced another poem - short, but much more challenging and psychologically complex.

This later poem, entitled Not Home, was about my anxieties (as a child) that one day, my grandmother might be dying at home and I would be all alone at home with her, not knowing what to do. This is a right-brained poem, laced with magical thinking, irrational guilt, subconscious associations and a child's fearful imagination:

I was eight, and alone.
Waiting in the garden I talked
to trees. Seeds sprouted.
Crickets sang. In the house
Grandma lay dying.
Caught an insect, held it
in my hand. Plucked a leg off,
as I softly sang. Very cruel,
very bad. Surely Papa would
come home, if I were bad.
Make me hurt, for being bad.
One more leg then, and another.
Time crawled. I lost count.
Finally there were no more legs,
but Papa wasn't home.
I dropped the useless insect
on the ground. In the house
Grandma went on dying.
On and on her body twitched,
till I crushed it with a stone.
Papa wasn't home.

Asian Cha is a website dedicated to poetry in Asia. In 2009, they published this poem. They were also sufficiently impressed to devote an entire essay to it. For the literature buffs among you, here's their commentary.
13 comments: