Mr Wang at the Esplanade 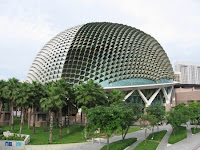 Just received an email from someone working for the Esplanade. In conjunction with National Day, the Esplanade will be holding a national poetry exhibition in August. Selected works by Singaporean poets will be exhibited at different areas throughout the Esplanade building.

The Esplanade wrote to ask for my permission to use a poem of mine - it's entitled Construction. I said okay.

I feel somewhat happy for this poem. The Quarterly Literary Review Singapore previously published this poem and it also appears in my book Two Baby Hands. But apart from that, Construction has not received much airplay or attention.

They were building a subway
station right next to our block.
Most of the time, you could not see
the workers. They worked deep down below,
beyond the reach of light -
like so many termites carving
ceaseless secrets into the hidden parts
of a wooden house.

At noon, they emerged from tunnels,
blinked into the sudden sun.
After a quick meal, they lay
in the shade of void decks
and swiftly folded themselves into sleep.

They became so still and quiet
you might have thought them dead.