The Strange History of Productivity in Singapore

So the latest buzzword in Singapore is productivity. The ministers are touting it as the next great new idea that will ensure Singapore's survival and success in the future.

This is funny. Because productivity is not a new idea in Singapore. In fact, it is rather old. Back in the 1970s and 80s, productivity was one of our favourite national campaigns (along with the "Speak Mandarin" campaign and the infamous "Stop At Two" family-planning campaign). 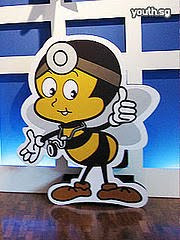 Productivity even had its own mascot (known as Teamy the Bee). And it also had its official song that would be aired on radio and TV. The lyrics went something like this:

"Good, better, best,
never let it rest,
If it's good, make it better
If it's better, make it best!"

I still remember it, because I was in primary school then, and it was a simple, catchy tune (the kind that would appeal to young children). By today's standards, the words are very corny. But then the world was a simpler, more innocent sort of place back then.

Anyway, productivity was such a big thing in the 1970s and 80s that it even had its own statutory board. Yes, along with key public institutions such as the HDB, URA, PUB and CPF, we also had .... the NPB! The National Productivity Board.

The purpose of the NPB was to promote practices in Singapore that would lead to increased productivity. A big part of the strategy involved studying the Japanese workforce, who were known for their high standards and productivity.

When did the productivity drive start to dwindle and fade away?

I can't pinpoint an exact date. We know however, that the NPB died in 1996. Parliament repealed the National Productivity Board Act in April that year. From then onwards, the NPB officially ceased to exist.

Around the same time, whether by coincidence or not, Singapore launched its new key strategy for the nation. It was all about getting skilled manpower from overseas to relocate to Singapore. In that same year, the phrase "foreign talent" entered the national vocabulary for the first time.

Well, you know the story from there. As the years passed, "foreign talent" became a looser and looser term.

"Foreign talent" used to mean highly-skilled professionals from overseas, who possessed expertise and knowledge that was scarce in Singapore - people such as cardiac surgeons and university professors.

In 2006, PM Lee, when making his National Day rally speech, tacitly abandoned the word "talent". He didn't say "foreign talent" anymore; he merely said "foreigners", when referring to the foreigners working and living in Singapore.

It was both honest, and dishonest, of him. Honest, because he was admitting, in his own way, that not all our foreigners were "talented". Many were decidedly mediocre. This was the inevitable result of our strategy of importing as many foreign Toms, Dicks and Harries as we possibly could.

It was dishonest of PM Lee, because he abandoned the word "talent", without expressly pointing out that he was doing so, and without saying why. It was a verbal sleight of hand. Most people didn't spot it. The policy had morphed, from a small-scale initiative to recruit highly-skilled foreigners, to a huge initiative to recruit any foreigner who would put his hand up. PM Lee wanted to admit, and yet not admit, that the policy had changed.

Anyway, the problem with taking too many low-skilled foreigners is that the national productivity goes plummeting straight down. That has happened in Singapore, it has been discussed a lot recently, so I won't go further into it.

Here's to Teamy, our dear old friend. When all else fails, going back to the basics may just work.

Another Odd Fish in the Small Pond of Mr Wang's Life

In the near future, I'll be flying off to Europe to attend a course. It is a global course, with participants coming from many countries all around the world.

The course is residential, one week long, and intensive. Every day, it starts early in the morning (like 8:00 am sharp) and ends quite late at night (like 9:30 pm). There are no breaks except for lunch and dinner. When I get back to my hotel room each night, I'll also have to prepare for the next day's sessions. Which means that I probably won't get much sleep.

The course will be extensively graded and scored. If I pass, then I qualify for Part 2 of the course. This will be another intensive one-week event, to be held later in the year, in another part of the world. If I fail (either Part 1 or Part 2), then I am automatically disqualified from being considered for promotion in 2011. That's a strict rule.

You might be thinking that since I am a lawyer, the course probably has to do with the law, and that I will be attending lectures and sitting for exams.

However, it's not that kind of course at all. The course is mostly about personal effectiveness, and soft skills. And it is extremely hands-on. Based on what I know about it so far, a big part of the course will be run like a .... reality TV show.

What do I mean? Well, the course will constantly place me in a variety of simulated scenarios. For example, I might be required to act as the leader of a group of people facing an emergency. Or I might have to act as a CEO chairing a meeting on business strategy. I would then be closely observed, to see how I handle the situation.

And I will be assessed on attributes such as my leadership qualities; my presentation skills; my ability to convince and influence other people; and how I make decisions. Throughout the week, there will be judges to give me criticism and feedback on my performance.

It's going to be a little bit like Survivor (but less rigorous), or The Apprentice (but less bitchy) or the American Idol (but less glamorous).

(I understand that in one particular year, the participants even had to plan a rescue mission. There was a real cliff, with rappelling equipment, and a real little girl waiting at the bottom of the cliff. The idea was that you and/or your team members had to rappell down the cliff, to rescue the girl).

I've heard accounts about a few previous participants who felt so stressed that they voluntarily dropped out of the course, after Day One or Day Two. They chose to drop out, even though they knew that their promotion prospects would be dashed. So evidently the course can be challenging.

I do look forward to it. It will be an unusual and memorable experience, at the very least. Wish me luck!
25 comments:

The Sorry Story of Jack Neo

Filmmaker Jack Neo is all over the news now. You probably noticed. It's like a local version of Tiger Woods' sex scandal, on a much reduced scale of course.

Like a cliched plot in a bad movie, these sorts of stories seem to follow a predictable pattern. Tiger went on to to make a profuse public apology (which failed to stop his commercial sponsors from continuing to dump him). No doubt, Jack will do the same in the near future (in fact, he has already promised the media that he will soon "tell it all").

Well, here's the first thing about apologies. Is the person sorry about what he did, or is he just sorry that he got caught? Mmmm, go meditate on the difference.

Here's the second thing. Why is that Other Woman not apologising? How come when a married man has an affair, the man needs to apologise, but the Other Woman gets to act like a victim, all moral-uppity, as if she didn't know he already had a wife?

And the third thing is - why even apologise to the public? If Jack was an accountant or a human resource officer or a florist, and he had all these affairs with miscellaneous women, the public wouldn't give a hoot. The only reason why the public is now interested is that Jack is a celebrity, he's a star, he's Singapore's best-known filmmaker. We all feel like we know him, just because we've watched him on TV since his Liang Po Po days, and we've enjoyed his movies such as Money No Enough and I Not Stupid.

But does that really mean that Jack owes the public an apology? Are filmmakers supposed to be the paragon of virtues? Who appointed them to be the public flag-bearers of moral standards? Are celebrities supposed to be role models for all the husbands and fathers? Errrr, not as far as I'm aware.

As a member of the public, I do not feel that Jack owes me an apology. I'm not saying that I think that Jack is wrong or right. I am saying that it's basically none of my business.

And I do not think that it's the public's business anyway. If any apologies are to be made, they should be made behind closed doors, and they should be privately exchanged between Jack, his family members and his Other Women.

The rest of you kaypohs, move along, move along. Stop blocking the traffic.
75 comments: