Poetry on a Friday 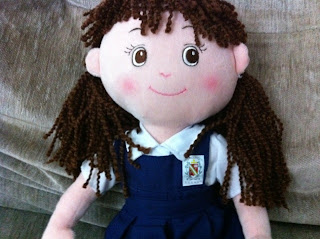 Meet Anna, the latest addition to my daughter's doll collection. If you notice that Anna seems to be wearing something very similar to a CHIJ Saint Nicholas uniform, well, that's because she is.
I received this little doll last Friday afternoon, as a token of appreciation from the school. CHIJ was organising a poetry event, and I was one of the two invited speakers. The other invited speaker was Marc Nair, who had recently published his second book, entitled Chai, which is a collection of his travel poems.

About 250 students attended. Most were from CHIJ Saint Nicks itself, but there were also perhaps 20 students from other schools including Anderson Secondary and Deyi Secondary. I spoke about how to explore one's everyday experiences and circumstances and use them as material for creative writing. In retrospect, I probably could have simplified my presentation and made it a little less high-brow.

I also read five poems from my book Two Baby Hands. One of the poems was The Couple Next Door, a poem about wife abuse, set in the HDB heartlands. Coincidentally, a CHIJ literature teacher told me that another school, Singapore Chinese Girls School (SCGS), had just used this poem to set an exam question in their literature prelim paper.

The Couple Next Door

Sometimes at night I hear them fight. I think
it's over money. Usually he's drunk. He always wins.
Hits her with something heavy - I can't tell what.
She cries awhile, then falls silent. A door slams.
This happens about once or twice a week.

I listen intently to all their fights. I blast my radio.
He will hear me. And know that I can hear him too.
My small intrusions. My vague useless gestures.
My rock music turning violent, bearing futile witness,
battering doors at midnight demanding entry.

What does she do, after he falls asleep?
Perhaps she lies besides him, counting the reasons
not to leave. This time not so bad, no need to see doctor.
Maybe: I cannot go. We are already married.
Or worse - He won't do it again. I know he won't do it again.

Sometimes in the mornings, on the way to work, I see her
in the common corridor. She must know that I know.
Her eyes avoid mine. I let the walls stand.
I will be the stranger who sees and hears nothing.
I believe we both prefer it that way.

Perhaps a little overly dark, for teenaged students. But then again, perhaps not - since SCGS had seen fit to use it as an examination question. Ah well.

Quite a number of secondary schools in Singapore use my poems for their literature lessons from time to time. It all started several years ago, when the Education Ministry asked for my permission to include my poems in their official "teaching resources" file, for literature teachers. Although I don't get paid for this, I am pleased that this allows many of my poems to get a regular readership, year after year, among Singapore's literature students.

Babies and Fractures and Einstein on the Violin

In terms of manpower, my department has been jinxed most of the year.

I am happy for the two new dads. And very sorry for the stairs-tripper. I am also sorry for myself - because guess who has to do all the work, while all these other people are away?

Rather ironic, because next week I am to give a talk at CHIJ Saint Nicholas (it's a literature camp, for students from six schools) and one of the things that the organiser asked me to talk about is how I successfully juggle my career with my creative writing.

Since blunt honesty is one of my more endearing traits, I don't think I will paint a pretty picture for them.

It's bloody tough. My progress on Book 2 is slow as snails.

One thing I will say is that everyone should have at least one passion, outside of and away from their career.

Doesn't matter what you do for a living, doesn't matter even if you really, really like your job. That one passion, away from your main job, allows you to recharge, renew, gain another perspective, live and learn and grow in a different way.

If creative writing is your thing, then that's great. If it's something else, that's great too. As long as you find it.

Einstein used to play the violin. Did you know that?

In other literary news, I'll be reviewing a new book - Reaching for Stones, by Chandra Nair - for Quarterly Literary Review Singapore. This is a pretty hefty collection, compiling his poems from 1963 to 2009. No further comments from me at this stage, as I just received the book (free review copy, yay!) yesterday and haven't read it yet.

Also, my publisher just told me that he's in talks with an electronic publisher in the US to license them the rights to reproduce and distribute my poetry book Two Baby Hands in any "electronic format or media, now in existence or hereafter developed".

I wonder whether that means I'll be able to read my own book on my iPhone. I would love to be an iPhone app - wouldn't that be cool?
6 comments:

The Perils of Not Attending Kindergarten

Okay, this is my situation (I mentioned it briefly in my previous post too).

My wife and I got some hassles from the Education Ministry this year, when we registered our daughter for primary school. The reason was that we hadn't sent our daughter for Kindergarten Two.

The first hassle came, when my wife was actually at the school, on Registration Day. My wife had to fill up a form, and at the space where she was to write the name of the kindergarten that my daughter had attended, my wife wrote "N.A". Then the MOE officer became quite rude, kicked up a fuss and said things like "How do we know that your daughter is ready for primary school, if she hasn't even done her K2?"

My wife pointed out that:

(2) There is no basis to reject a child from a primary school, just because she hasn't done her kindergarten;

(3) It isn't that we didn't give our daughter any education. Quite apart from homeschooling, we also sent her for various enrichment classes. It's just that our daughter did not go to kindergarten.

Finally, the MOE officer grudgingly registered my daughter, and we thought that this would be the end of the matter. However, over the next month or so, my wife continued to receive a number of telephone calls from the Ministry, with someone on the other line constantly asking my wife questions about why we hadn't sent our daughter to kindergarten.

The questions had a somewhat accusing tone, as if we were negligent, useless parents ... or parents too broke to send the child to kindergarten.

Finally, feeling quite exasperated, I sent a very long email to the Education Ministry telling them, in effect, to "get lost", and also informing them in great detail why we didn't send our daughter for K2.

Briefly, my daughter is very bright. She found K1 very easy. It bored her. She was way ahead of most of her peers, in her reading & numerical abilities. She's also very much ahead in other areas like social development. 85% of her first year in kindergarten was basically a waste of time for her.

So after she finished K1, we decided not to send her for K2. Instead we sent her to a variety of enrichment courses at different places (English; Chinese; Maths; and Speech & Drama), picking centres that customise their teaching to cater for kids of different ability levels. This has allowed my daughter to learn at a pace quick enough for the lessons to stay interesting for her.

On a weekly basis, my daughter still spends much less time in a classroom setting, than she would be if she were attending K2. But that's not the point. Most of the time in a K2 class would be irrelevant, boring and useless for her. At least now, whatever time she spends studying is spent on materials and lessons at an appropriate level for her.

Anyway, after further discussion with the Education Ministry, their tone changed at some point. And now they are advising my wife and me to send our daughter for testing, to assess whether she is "gifted".

The thing is - I'm not too sure where to send my daughter for testing, and what that process is all about. The Education Ministry did give some tips, but I would still like to know more about this whole matter. Also, if any of you can recommend a suitable psychologist, I would appreciate this. Thanks .....
28 comments: