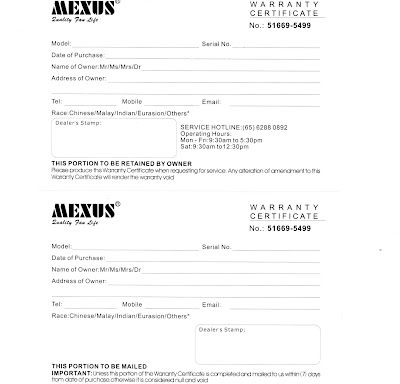 So my wife bought a new fan today, some brand called Mexus which I've never heard of. Anyway, after I assembled the fan, I took a look at the warranty certificate.

There are two things which are uniquely Singaporean about this warranty certificate. And uniquely stupid.

Firstly, it requires you to state your race, before you submit the warranty certificate. Secondly, the options for "race" are Chinese, Malay, Indian, Eurasion (sic) and ...... "Others".

After all these years, why do we still not realise that for most things in life (including the administration of home-appliance warranty certificates), the person's race is simply irrelevant.

And that in any case, it's not very polite to refer to minority races as "Others".

By the way, Mexus, if you're reading this - I didn't like your product because it didn't come with any instructions on how to assemble it. Even a simple diagram would have been appreciated.

It is also quite common to see "Dealer's chop" instead of "Dealer's stamp".

After all these years, why do we still not realise that for most things in life (including the administration of home-appliance warranty certificates), the person's race is simply irrelevant

For some companies (not MEXUS), all this data is useful if is it used for other purposes, eg selling to third party.

It's not purely Singaporean. I came across the same stupidity when doing my PSATs. Of course, the range was much wider: a dozen rather than four.

In the religion slot, I could choose not to answer. Race? I had no such alternative.

Caucasian, African American, Hispanic, etc. etc. then "Asian/Asian American". I searched for some alternate means to identify myself. Is my ethnicity that vital? My main concern was my results being interpreted as typical of s yet another overzealous Asian student, someone born ABC, Chinatown or China - rather than someone with a distinct Singaporean identity.

Also, on the PSAT, one had to choose citizenship status:

But no "PR that does not intend on becoming a citizen very soon". (Why would I choose such an option? Because of Singapore's prohibition of dual citizenship.)

Morons. Insensitive morons, with their closed majoritarian thinking. On both sides of the Pacific.

These races identity columns are important to these companies so as to keep a data records for marketing purposes. They need the figures to see which products' designs, (such as colors of the products.) are appealing to which ethnic groups. This can help them to stay competitive in this market.

this was probably some cheap china product. You're rich, you could have afforded a european or japanese brand fan which would work for so long that you wouldn't even need a warranty.