Just yesterday I was exchanging emails with Prof Cherian George about some Harvard Law School researchers who will be visiting us in Singapore next week. Then today by coincidence I see in TODAY that Cherian has been busy presenting some new views about mainstream media and blogs in Singapore.

The Harvard researchers are in luck, because that's precisely one of the topics they're coming to Singapore to research. And Cherian will probably have plenty to tell them.

IF the current strict regulation of mainstream media continues unabated while the alternative media freewheels in cyberspace, Singapore could become a "schizophrenic" nation.

That was the observation of Dr Cherian George, an Institute of Policy Studies adjunct senior research fellow at the institute's annual Singapore Perspectives conference yesterday.

He said: "A dual regulatory regime has evolved: Stricter supervision of mainstream media — the national press and TV — and more latitude for niche or alternative media. Alternative media are also structured differently, allowing them to act differently from the mainstream."

While online media like blogs and forums can deliver news fast and loose, mainstream media has to go through layers of checks. And where alternative media can reflect dissenting opinions, traditional media is limited in that respect, he said.

"The danger is in creating two different worlds and two different set of experiences for Singaporeans. I don't think it is entirely healthy, there needs to be some connection between the two worlds or we'll end up being a schizophrenic nation," he added.

Regulation on traditional media hence needs to be "loosened up", he said, adding that some media laws could soon be reviewed or passed.

If schizoprehnia is really the problem, then logically there are two alternative solutions. One, as Cherian has mentioned, is to loosen up on traditional media. The other is to (gasp!) tighten up on alternative media.

Unfortunately, I don't see any indications that the government is moving towards the former approach. And I think it's entirely possible that it will move towards the latter.

There is a third approach. It's to simply live with the schizophrenia. I'm not sure why Cherian considers this unhealthy. I see it as an almost-necessary consequence of the technological age. It is the theory of the Long Tail all over again. 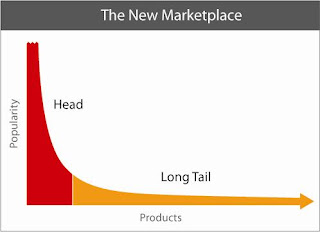 In a nutshell, the Long Tail predicts that both culture and economy will shift away from a focus on a relatively small number of "hits" (mainstream products and markets) at the head of the demand curve, toward a huge number of niches in the tail. Click here to learn more.

In the blogs/media context, this is what it means. Technology makes so many more options available at no extra cost that people will inevitably gravitate towwards seeking out what appeals most specifically to them.

You can think of it this way - there are 35 million blogs in the universe to choose from, and tens of thousands of online newspapers. If you don't like the Straits Times, why should you read the Straits Times? If you don't like Mr Wang, why should you read Mr Wang's blog? You can jolly well go elsewhere. How do you find your way? Devices like Google and Technorati make the search remarkably easy.

So in the end, we all become highly specialised, highly niche consumers. Faced with a vast number of options, each of us makes our own unique set of choices. We go for exactly what we like. Each of us ends up reading different stuff, and some of us will read extremely different stuff from the rest of us.

That's what Cherian calls schizophrenia. But is that really unhealthy? I. Am. Really. Not. Convinced.

i. love. that. last. sentence.

The 66.6% vs the rest already live in two different worlds. One where propaganda is uncritically absorbed from the ST and the other where the ST is ignored.

Hmm, let me hazard a guess.

Perhaps it is 45% if you count foreigners as non-citizens and non-PRs?

And then perhaps it is 70% if (like some other weird statistics) you count PRs as Singaporeans as well?

So the numbers are massaged until it does not sound so alarmist and then quietly "fixed" ? :-P

My IQ is not that high.

Can someone please explain the link between the % mentioned in the comments and the title of the blog?

Why must MSM and alternative media be mutually exclusive? I get information from both groups. What does that make me?

People should stop drawing lines and just go with the flow. Only reason why they do so is to set the stage for them to eliminate or control alternative media influences. For all you know, alternative might just become MSM one day.

Worrying about "schizophrenia"? That's more like paranoia to me. Or are they worried about the potential of alternative media to replace MSM?

CNA's doctoring of the figure on percentage of jobs going to foreigners just about sums up how "credible" the MSM in S'pore is.

MSM is monopolised, so what can be expected? So it does not matter what the medium is. The Internet was originally invented to be free n robust; its origins were in the motivation of a defence that can withstand a nuclear attack by the Russians.

What is Cherian George up to? To sensationalize? Or to bring abt a MSM-oriented approach to rid schizoprenia?

Often times, the things we seek to control aren't as potent as the selfish lustful desires of man that will bring forth his downfall.

That was what struck me after reading this piece of fiction here:

I could certainly see lots of parallels.

It illustrates the power of controlled MSM to massage figures for political purposes.

As an undergrad at SMU who has just returned from an extended stint in several north American institutions, I have to say that I believe the current media regulations cannot persist.

I grew up thinking about what I read on the internet - and at the same time thinking about all the happy news available in main stream media. The way I see it - even though Singapore and Singaporeans in general may be able to live with such a vast (and increasingly large) disconnect between the new media of today (blogs, etc) and the old media (eg. mainstream ST), the fact remains that most of the modern world has progressed, and will continue to do so - both socially and culturally.

For us to force our society to remain in such isolation can only mean, in my honest opinion, that we are setting up ourselves for a dangerous situation where the disparity may become haltingly unbearable - which may precipitate a violent correction... much akin to a violent market bubble bust.

Singaporeans by and large are already schizophrenic.

How can anyone read the Straits times, apply reasonable critical thinking, and not end up slightly miffed, at very least? You'd have to be slightly mad to accept the inconsistencies and contradictions calmly.

Unless, of course, the content does not apply to you, one way or the other. Then there's no concern at all.

We were already very efficient then. Keke.

Hi Mr Wang, thanks for the opportunity to elaborate. - Cheers, Cherian

I think the idea of infinite niches and options works only if they are all equally available to everyone. In terms of media knowledge, there will always be a huge non-internet-savvy group who have to rely on the highly censored and narrow range of MSM options as their only source. While the savvy ones can choose to switch between MSM and alternatives. Current state of ‘schizophrenia’ split between internet/MSM is better than 1984esque totalitarianism, but tends to be divisive. It is not a case of MSM vs Internet, but how they should coexist in a socially sustainable way. The importance of loosening up the mainstream media to include broader range of views (which does not mean the replacement of internet space) is to provide a social levelling public platform common to all.

wow... the author mentions that if you do not like the ST, you can turn elsewhere.

I'm currently studying in Australia and there are a variety of newspapers available. Although one might still argue Murdoch or Kerry do own a large part of the media.

And it is astoundishing to compare the kind of articles which you get over here as compared to Singapore.

We all know the ST is owned by SPH, which is if not directly owned by the government, then in someway or another related to it.

Lets not mention TNP, TODAY or the other free papers we get each day. Who owns them, we jolly well know ourselves.

So tell me? what choice do we have? The internet?

Yes, it is an option.

But what about the rest of the ignorant population?

I believe someday they will wake up.

Censorship prevails in cyberspace too, it is not as though any thing goes here.

Besides Singapore is now at the crossroads of an "old" system whose argument is oppression and repression and a "new" simulated political reality which thrives on the maximum production of meaning and manipulation of truth.