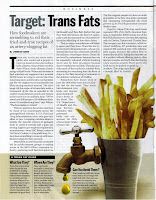 For the first three-quarters of my life, I was skinny. Then I became average. Then after I got married, I became, ummm, Slightly Overweight. Hence the New Year resolution. Today's workout was another light, easy, 20-minute run trot, just to get my body used to the idea of exercise again.

Still on the topic of fats, I've recently learned that trans fats are now a hot topic in the US. Last month they were been banned from about 24,000 restaurants in New York City.

In fact, trans fats have also come under close scrutiny in countries like Denmark, Canada and the United Kingdom. The measures taken have ranged from an outright ban, to laws requiring food manufacturers to state the amount of trans fat on their product labels.

What about Singapore? Bear in mind that Singapore is a country that generally just loves making things illegal. For example, we ban oral sex; gay sex; unlicensed public speeches; Jevohah's Witnesses; cats from HDB flats; durians from public buses; 4-man public demonstrations and non-constructive critics. One might think that trans fats are a sure target for a ban in Singapore. After all, trans fats have a definite link to heart disease and absolutely no known health benefit.

Surprise. According to this article, Singapore's Health Promotion Board does not think it's necessary to ban trans fats. It does not even think that it should be compulsory for food manufacturers to state the trans-fat content on their product labels.

The rationale? One reason given by the HPB is that Singaporeans consume less trans fats than Americans. So far, the average Singaporean's trans fats consumption is still within the World Health Organisation's recommended daily allowance (although it baffles me why the WHO recommends the daily consumption of anything clearly bad for your health).

More interesting reasons given by the HPB are these:

The HPB is hesitant to pass legislation on trans fat as this would result in trade barriers, especially since many food products sold here are imported from various counties.

"About 70 per cent of packaged food products currently do not carry trans fat labelling and will be affected," said HPB nutritionist Grace Soon. "This will drastically limit the choice of food Singaporeans have right now."

Legislation limiting trans fat to 5 per cent of a product's total fat content would affect 30 per cent of packaged food here.

I feel a little sad to see the Health Promotion Board provide such reasons. I checked their mission statement - it says things like "to empower Singaporeans to achieve optimal health" and "to ensure accessibility to health information and preventive health services".

It didn't say anything like, "to promote the business of fast-food restaurants" or "to facilitate international trade in food products". Should trade barrier issues really be in the purview of HPB nutritionists like Grace Soon?

"About 70 per cent of packaged food products currently do not carry trans fat labelling and will be affected," said HPB nutritionist Grace Soon. "This will drastically limit the choice of food Singaporeans have right now."

I don't see mandatory labels will drastically limit the choice of food Singaporeans have now.

Surely, most companies that export packaged foodstuff to Singapore also export them to the EU and the US where food labelling laws are stricter.

Furthermore, it can be implemented piecewise. For example, we can require all confectionary items to have transfat labelling, then snacks, etc.

70% of packaged food are produced in... Singapore, Malaysia and Indonesia for these same markets and the labeling of said products is approximate.

Personally I don't see how it is really very "drastic" to print new food labels to include trans fat info.

The grand total of extra words needed is about six. Eg:

Everything this Gov do have only one aim, Make Money.
Why spend all this time to defend their reason for not doing something on things that might hurt the population, must be view by them on an economic angle.
1.) Do not disturb the existing tax paying business or have a stake in it.
2.) More sick people is good for the health care secotr

If you understand the bottom line, it's easy to see how and why they make poicies.

The WHO recommendations probably refer to Maximum Levels of intake. Trans fats cannot be banned outright because trace amounts appear naturally in animal protein. The idea is to keep the levels of eaten trans fats to small amounts.

I suppose, the HPB must have some kind of data on Singaporean diets' to be able to say that the nation takes trace amounts of trans fats.

Still, it would be nice if they made some kind of move towards transfat labelling for mass produced foods, instead of just citing "trade barriers".

as usual, we just keep putting up barriers, barriers to our making of informed choices.

You summarized it well posing the retorical question:

Should trade barrier issues really be in the purview of HPB nutritionists like Grace Soon?

Even if it is the case that trade is under the purview of Health Promotion Board as one of its many concerns, as well-rounded as stats board could concievably be, does its name not suggest that the health of the citizens of Singapore should be its top priority?

Oops, according to today's newspaper, Shanmugam alleged that the NKF had lost its plot by putting fund raising first and the welfare of patients second. Anyone noticed any similarity here?

This topic irked me so much that I dug up more information lest anyone is interested:

A good resource is Ban Tran Fats. It claimed that "a 2 percent increase in energy intake from trans fatty acids was associated with a 23 percent increase in the incidence of coronary heart disease...." citing New England Journal of Medicine studies.

Harvard School of Public Health in this update, TRANS FATTY ACIDS AND CORONARY HEART DISEASE , reported, "Based on the available metabolic studies, we estimated in a 1994 report that approximately 30,000 premature coronary heart disease deaths annually could be attributable to consumption of trans fatty acids.", which works out to about 1 death per 1000 population in the USA per year. Now that is high compared to the Singapore rate for colorectal cancer of 33.4 and 31.0 per 100,000 population per year for males and females repectively provided by the National Cancer Centre, Singapore. Alarming.

These two sites also covered important topics such as
1. alternatives to trans fats,
2. argument against change from economic cost of replacement,
3. milestones in the fight to ban the use of trans fats and explicit labeling (sorely lacking in Singapore. Has any of you tried to make sense of the difference between vegetable oil, vegetable fat, partially hydrogenated vegatable shortening (the last is surely trans fat). My hunch is that in Singapore all three are interchangeable!),
4. list of products with trans fats (unfortunately, Oreo from Thailand found in all major supermarkets still includes "partially hydrogenated vegetable oil" unaffected by the move to have no trans fats in the USA products. Though the honesty is appreciated, I am envious of obese Americans who can heartily stuff themselves silly with Oreo cookies knowing that they contain zero trans fats due to close government oversight and civil acitivism. Hey, I thought we are the nanny state here!)

How does the economic costs in trade weigh against the health cost and death resulting from the lack of regulation now? May the HPB attempt to enlighten us on this soon.

Lastly, thanks to Mr Wang who brought trans fat conscioness to the blogosphere! May your resolution to live a healtier lifestyle bear fruit.

This resembles the HDB trying to explain that their land cost is very high, ergo we are paying for a highly subsidized housing. HPB explaining that singaporeans eat little trans fat, ergo there is no need to ban. Really brilliant logic.

The deaths attributable to trans fats has been greatly exaggerated because I missed a decimal place. My mistake :b Enough to make me lose sleep over.

3 times is still very high, considering that colorectal cancer is one of the most frequent cancers that Singaporeans get.

nothing like an endorphine rush i'd say. keep it up :)

i just got back to working out myself.

I for one read the labels on the cans. I am obese... but then one still need to eat healthy.

In Taiwan, they have a requirements for all the imported items to lable the trans fat. What the importers do is to print out stickers of the contents in the cans and stick it over the existing label.

You can get retirees to do things like this... does not add much cost to it.

HPB is the taking the easy way out

Can't you see its some family's business having their fingers stuck in all these trans fat business.These pathethic people from the 'health promotion board' - my foot are just some elevated scholars of a mouthpiece who need to keep their pockets lined so they can go overseas on gourmet binges and attend the local astronomical gastronomic festivals

A word of caution though to that family. Your days of creaming the fat off Singaporeans are numbered because you are going to get sudden cardiac arrest very soon.

It is not too difficult to understand the government's thinking on the trans fat issue.
Restrict trans fat --> less food choices --> higher food prices --> higher cost of living --> risks of loosing more votes in the next election. It saddens me to know that the government thinks that its popularity is more important than the health of people.

I think that product labelling is not too much to ask for. As it is, I am always checking food labels to understand what I'm eating. I'm horrified to discover now that food manufacturers are allowed to deliberately conceal their trans fat content.

i don't think it's difficult at all to print a sticker that says " Contains Trans Fat"!!!
Well...I am totally disappointed with our local authority. Still the cheek to reply my letter on the MSG issue , that MSG-free claim is misleading yet i am still seeing so many products in the supermarkets carrying such claims...
Liars!!!

I found this site using [url=http://google.com]google.com[/url] And i want to thank you for your work. You have done really very good site. Great work, great site! Thank you!