Poem for the Day 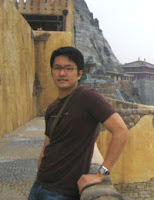 The chap on the left might look vaguely familiar to you. He used to read the nine o'clock news on TV. Anyway his name is Paul Tan and he's a friend of mine.

In his usual style, first meeting of hands has a generous dose of "social commentary" poems. Paul likes to make poetry out of the everyday stuff of life in Singapore, injecting little insights and ironies. Here's one that I enjoyed:

Mr Tan, you have written here that I'm not
task-oriented or adequately equipped
for the high-performance organisation,
not creative or committed enough to
identify problems, plug gaps, form alliances
to meet all your KPIs. You observe that
I am not aligned to your corporate values,
unable to see the helicopter vision,
myopically clinging on
some stubborn sense of self.

I am, as you say, slow track, low band,
grade E, non-scholar, with no CEP to speak of.

It's all true. That's why
I lost - again - that train seat in
the standing-room-only carriage today,
sidling aside like a languorous sloth,
as more focused, purposeful
commuters elbowed their way,
eyes trained, like caged predators,
on those few elusive seats.
At least I gave them a standing ovation.

Nice poem. It really reminds me of my days working in a GLC.

Current Estimated Potential, a civil service term which determines how many times you must be promoted within x number of years.

In the Singapore civil service, your CEP is practically fixed from Day One.

On his first day at work, a PSC OMS scholar will already be assigned a very high CEP score, which indicates for example that he should be promoted 5 times in the next 7 years, or something like that.

His actual performance on the job is not relevant to his promotions - only to his annual bonuses.

Interesting, I never knew that.

Does a person's CEP change over the years? Or is it fixed at the point of entry?

CEP - Confirmed Earning Package? Just like the upcoming workfare, only that it is for non-civil servants...

To use a well known example from the SAF we all so love,

a SAF CEP is BG or COL, unless he or she screws up. Then LTC or COL lower class.

a OM Scholar CEP is usually a Colonel or LTC, unless he or she screws up terribly.

A normal uni grad CEP is usually either a Major or very very rarely a CPT.

CEP for Ops and Int is usually higher than CEP for S1 and S4.

IF anyone can confirm the above, I would be glad too.

CEP score cannot be changed, because it supposedly is a measure of long-term, stable traits in an individual. By measuring these kinds of traits, the organisation is able to make long-term plans for its employees.

Basically, the "long-term stable traits" that the Singapore government measures is your class of honours when you first graduated. That effectively determines your fate more or less forever, in the civil service.

If you have a high CEP and you perform very well, you will be regularly promoted AND get very good bonuses.

If you have a low CEP but you perform very well, you will get very good bonuses but you CANNOT be promoted.

If you have a high CEP but you perform badly (like some f--ked-up government scholars), you will not get good bonuses, but don't worry you will still be promoted fast, fast, fast, all the way up to the top, and you can collect all the big salary increments along the way.

If you have a low CEP and you don't perform well, aiyah, just give up and die lah.

i don't understand. if CEP score cannot be changed, what's the C (current) for?

The civil service borrowed this system from Shell, but with disastrous modifications.

This is how Shell applied the system -

The civil service, however, assigns a CEP score on Day One (actually, that is not correct, it assigns a score even before the person has started work).

However, the civil service assumes that if you score 1st Class Honours, it must necessarily follow that you are excellent in teamwork; you possess strong communication skills; you have strategic or helicopter vision; and plenty of drive.

So daft it's almost unbelievable.

at least some of us like the poem. Timeless prose that is original does not happen everyday...

If truth were beauty, and Thought no Crime
Of paying per
Verse, in letter not spirit? Broken
Upon that Maginot line, for we are wont
To aspire to poetry
But some of us can't.

Hi, I did ranking when I was in NS at Mindef. There're some misconceptions and errors about the CEP system. Please note that I am not pro CEP system. I' m here to give an objective view on how the system works, not an evaluation on its merits and demerits. Here's how the CEP system works:

CEP is a measure of the employee's highest attainable rank/position(SAF/civil service) before retirement.

It is calculated based on a set of 10 criteria. As far as I can remember, they're -- political sensitivity, imagination, sense of reality, communication, leadership, teamwork, respect accorded by peers, ability to handle pressure, problem solving ability and most importantly HELICOPTER QUALITY.

Helicopter quality refers to the person's ability to identify problems within the larger context and solve them accordingly. Basically, a person with high helicopter quality has a broad overview of things, and this is more suited to a higher level post where a broad oversight is required.

Lets look at fresh grads beginning on the job. All civil servants (both psc and non scholars) start off at the same CEP. The CEP is reviewed every year during the annual ranking exercise by a board. The employee's direct superior gives the rank, and usually the chair of the board (perm sec/CO) wll approve without much contest, unless other members who have worked with the employee voice objections.

The max CEP an employee can receive is 3 grades above his current grade, the rationale being that it is not possible to judge CEP above 3 grades because of the lack of exposure adnd opportunities to situations that would allow such an assesment to be made. One cannot tell if a 2LT can handle the job of a LG unless he takes on a role that can highlight his abilities. This is the main reason why CEP is reviewed and adjusted yearly.

To get promoted to the next level, the employee has to have a CEP equal or higher than that level, AND have a performance ranking of at least C+ for 3 consecutive years. (Don't be confused between CEP and Performance. CEP measures potential, Performance, well, performance). The possible grades for performance are A, B, C+, C ,D. There is a quota for performance grades and CEP grades (not more than 30% of those ranked can be given A and B grades, the next 50% are given C+, the bottom 20% are given C, and hardly anyone is given D, unless they really screwed up.) The quota allocation changes yearly, and is different for different ministries.

To reiterate, to get promoted to the next level, the employee has to have a CEP equal or higher than that level, AND have a performance ranking of at least C+ for 3 consecutive years. If you don't meet the performance criteria, you don't get promoted.

Of course, there are many cases of employees with a lower performance rank but a higher CEP being promoted above their colleagues.

The rationale for doing so can be best explained by the EPL and Div 1. The top scorer in Div 1, A, has played excellently, bagging 40 goals and helping his team get promoted to the EPL. Wayne Rooney is having a torrid season, scoring just 10 goals. The point is, Rooney will always be a better player than A, because he has greater skill/potential. A might be performing very well in Div 1, but when he plays in the EPL, he can't maintain his performance, because he is playing at a different level. He does not have what it takes to play at the highest level.

Likewsie, if a company or ministry promoted employees solely on performance, there will come a point where the employee simply cannot perform, because he is at a level that he cannot handle (or because he has a low helicopter rating).

The problem with the CEP system is that the direct supervisor is the only person evaluating the employee, and thus there might be biasdness or inaccuracy.

From mid-level to high-level positions however, the employees have to undergo psycometric tests, psychologists interviews, and a role playing exercise to evaluate their suitablility for higher positons. These quantitative tests will be added to the qualitative one used earlier.

Please note that I am not an ardent supporter of the CEP system. It has its flaws and is not perfect, but unless someone comes up with a better system for selecting talent, I don't see what choice we have.

I see 2 reasons why scholars achieve higher CEPs than non-scholars. First, they are brighter and hence perform better. Second, scholars are given more opportunities and a more developmental training. In the SAF and civil service, certain positions (called estabs) are reserved for scholars. These tend to be the more high profile posts like Branch Head, Deputy Director etc, which require more responsibility. The scholars are also attached to do projects, where they can showcase their skills and creativity. The scholars are thus given more exposure and opportunity to showcase themselves, and assuming they don't screw up, will naturally be given a higher CEP than the non-scholar, who has to be truly exceptional in the limited role he is given to be noticed. Note that I am comparing the paths of two fresh graduates, scholar and non-scholar respectively.

First class honours grads tend to have higher CEPs simply because they are generally brighter, more motivated, more determined etc than the average grad, not because of an endemic systemic bias.