Kids, Dentists and Other Exciting Adventures

I WOULD like to express my dissatisfaction with Eastern Dental Surgery at Jurong West branch. I visited the dentist on Monday at 8.40am because my five-year-old son had a toothache. My son cried aloud when he went in. The dentist managed to give him two injections but with the third one, he was unable to bear the pain and tried to close his mouth, thus biting the dentist's finger which was inside his mouth.

The dentist shouted loudly: 'You dare to bite my finger, I beat you.' Then she gave my son three slaps on his arm. I was shocked and the next moment, she shouted: 'I don't want to pull his teeth any more, since he bit my finger. Ask them to pay up.'

The next minute I was chased out of the door and asked to pay $18. My son was so frightened he shivered non-stop and tears kept rolling down his cheeks.

I do not think this is the right way to deal with a five-year-old patient. If the dental clinic accepts children as patients, the dentist should not beat them if they are not cooperative. My son told me he does not want to visit a dentist ever again.

I found the above quite funny. If I were Ms Chua herself, or the kid, or the bitten dentist, I would not have found it funny. But since I'm none of these persons, I must say I do find it quite funny.

It reminds me of an incident in my own childhood. I must have been around five or six then. I had a toothache and my father brought me to a dentist. But I was so scared that I would not open my mouth at all. I didn't bite the dentist, but I resolutely kept my mouth closed. After an hour or so, the dentist gave up and my scowling father had to bring me home. 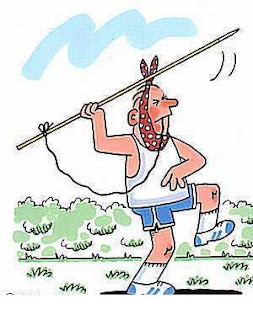 My wife and I have been more expert, in handling our own children. The trick is to bring your little kids for a routine dental check-up, long before they ever have any toothache. Under non-painful, non-traumatic conditions, the kid will be easily persuaded to open his mouth. Thereafter he will get used to the idea of having dental check-ups.

Also, if you are going for your own routine dental cleaning/scaling, you can bring your kid along to watch. Then the kid will see that dentists are nice people and there's nothing particularly scary about visiting a dentist.

(But don't bring your kid, if you are getting your wisdom tooth extracted. Because that is scary).

The dental clinic I go to is GPA Dental, at United Square. They have got the coolest technological gadgets I have ever seen in any dental clinic. There's a small touch of James Bond, in their toys.

One of them is a wireless intra oral camera, with a macro lens, a built-in light etc. With this little device, the dentist can take close-up, high-pixel, full-color photos of your teeth, from right inside your mouth. These photos are transmitted to a computer and you can immediately view them on a mounted TV screen. The dentist will store these photos in his computer, as part of your dental records.

The "trick" is actually very simple: bring your child to see a pediatric dentist - a dentist that has a few years of specialist training in pediatric dentistry and is board-certified in it. Apart from specialised training in handling baby teeth as opposed to permanent teeth, they are also trained specially in how to make children feel at ease for eg. they name the teeth A, B, C... and tell their kiddy patients that they are now going to examine the A tooth, then the B tooth etc, while the kid is looking at a disney movie
on the screen on the wall. Each procedure is explained patiently in a child-like language before the procedure is carried out, lest the child be caught unexpected. The docs are extra patient with kids (for why else would they want to specialise in pediatric dentistry if they dislike kids). After each visit, the kids get to pick a (super-cheap) toy from the toy box, that make them happy for the rest of the week.

Kids look forward to going to see their pediatricians and the pediatric dentists! It's stickers and toys time for them!

But alas, that's for fortunate children in usa and other 1st-world country. In this Singapore where our ministers get paid higher than any 1st-world country leader, we do not even have enough general dentists and doctors, let alone pediatrician and pediatric dentists thanks to George Yeo's early 1990s health review (while he was Minister of health) which concluded that Singapore has to cut down on the number of doctors and dentists and pharmacists. And of course, every medical visit requires full payment out of the pocket, and specialist dentists and doctors cost much more! No wonder nobody wants to train to become pediatric dentists. Sure no business.

And of course, as expected, Slave Chua Ying Jie paid up the demanded $18 meekly and obediently, and then later complain to the newspaper! Typical 66.6%.

In other countries, the parent would have been the one demanding compensation - both for the bite, and for the emotional trauma - and then making police report for child abuse, plus a complain to the dentistry board for unprofessional conduct.
Just what is so difficult for her to do all these? But no, she paid up even as she was fuming inside. Does this not resemble the mentality and behaviour of the 66.6%?

That's because in other countries, there is such a thing as consumer rights, patient rights, proper education in school which teaches students to stand up for themselves against injustice committed against them etc.

In Singapore? Everyone is taught to bow down to bullies - be they in the form of politicians or dentists - and to pay up despite unacceptable "service". Haha! Slave Chua has learnt well. 66.6% material!

You're right Mr Wang. Parents should bring children to the dental surgeons long before actual dental work is required. Our child first visit (at 3 or 4) was an adventure in/on a space ship complete with choice of flavoured toothpaste (bubble-gum was a favourite) & 'stickers' to go. It was all fun & in SG in the 70's.
Dental visits were not all easy as child had a smaller lower jaw and the "bite" was not right. Corrective adjustment was mths long & uncomfortable.
Hahha....there's more to come in later years, impacted molars, braces and retainers.
You need to have the right dental specialists that you & yr child are comfortable with. We went to 3 orthodontists before we like the last. It was well worth the expenses and the effort as the result was perfect ivories in straight rows and not a single cavity in past 30+ yrs.

Have any of you ever thought of who is responsible for a young child's dental health?

Sometimes, problems develop due to parents' ignorance or negligence. Some do not control the child's intake of sugared food or drinks or help them clean their teeth daily.

When problems start to surface, that's when both parents and the child sometimes face lots of headaches and in most cases, pain.

What i am driving at is, parents should know that they bear the responsibility for their young children's oral health.

I am talking about those problems which are caused by environmental factors, which can be controlled, and not those genetically linked or those caused by accidents.

Parents do not necessarily need to bring their children to a pediatric dentist, just a regular trusted GP will do(unless u are rich enough to do so). But monitoring and maintenance must be done by the parents/guardians, circumstances permitting.

To parents: If you do not want your kids to suffer, please do what you are supposed to do - take care of your children!

And for goodness sake, don't regale your kids with 'horrible' tales of your own dental experiences. You are just planting fear into their minds.

P.S: I am not defending the dentist's actions, which to me, is quite unprofessional and unbecoming.


From an experienced hand

Well, we really must choose the right Child's Dentist to ensure best and quality service.