Little Pieces of the Past

Another year draws to a close. Soon we'll be saying goodbye to our home, moving away and lugging ourselves to a new life elsewhere. This is as good a time as any, to start discarding the old and making space for the new. I've been tossing out all sorts of items, from clothes to books to electrical appliances. It's a kind of cleansing process.

Today I'm tossing out my chess trophies as well. I had to deliberate somewhat, before arriving at this decision. Felt a little sentimental about them. I decided to take a photo, before they all go into the bin. There:

I still have another collection of trophies in my parents' home. Left them there, after I got married and moved out.

These are just silly pieces of metal, wood and plastic, but I have some fond memories attached to them. I used to represent my secondary school, junior college, university and constituency. As a teenager, I also used to go around to different community centres (or clubs, as they're now known) to take part in chess competitions.

But also I enjoyed chess, because it brought me into contact with many quirky, interesting people whom I otherwise would not have met. And many of them became my good friends.

I think I gained a lot from this game. It taught me to be comfortable with complexity and uncertainty (and that's often how life is, complex and uncertain). I also learned to stay cool and think sharp under pressure, an attribute which has helped me in exam halls, courtrooms and corporate boardrooms. Another lesson I learned was to neither underestimate nor overestimate people, based on their appearances. Because appearances can be very deceptive .... 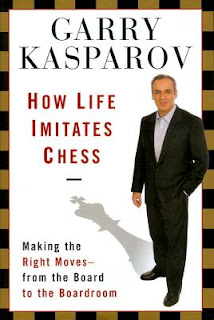 There's a fairly recent book by ex-world chess champion Garry Kasparov. It's entitled How Life Imitates Chess. I've not really read the book, but only browsed through different chapters at a bookstore.

It's not your usual "How to Play the Sicilian Defence" or "How to Play Rook Endgames" chess book focusing on some technical aspect of the game. Instead it's a book where Garry uses analogies and examples drawn from the game of chess, to discuss strategies for business, personal life and politics. (Note that after Kasparov retired from chess, he ventured into politics, and in fact, was a candidate for President of Russia in 2008).

I found it interesting to browse through Kasparov's book. Like many other serious chessplayers, I had realised long ago that many chess strategies are also applicable in real life. However, Kasparov's book is the first which really attempts to discuss how lessons learned at the chessboard can also be valuable elsewhere.

But in the end, I didn't buy the book. Because by the time I came across the book, I had already stopped playing chess for years. Much as I used to love this game, it's now a thing of the past for me.

And that's why I'm throwing out my chess trophies too.

I think you should keep one or two pieces for posterity... They'll come in handy forty years down the road, if you catch my drift.

You're an out and out INTJ :) but if it were me, keeping a few would be ideal, if only for the memories from childhood

And my daughter wanted a medal for her doll to wear. :D

I've been lurking on your blog for some time, and may even have posted a couple of comments before. I thought this post was interesting, especially the photo which you put up, particularly because I've played in a number of those same competitions. It does bring a tinge of nostalgia looking back.

By the way, we have played in the same team before. I believe it was one of the inter-clubs which our team went on to win. Sweet memories!