Poetry by the People

Moving Words was a literary project that launched in Singapore earlier this year. I was one of the 12 featured poets in Phase One, which meant that a poem of mine was chosen and displayed on a billboard featured at various MRT stations. If you are a regular train user, you've probably seen some of those poems from the different writers.

This was part of the promotional publicity for Phase 2, a writing competition which was open to all members of the public. The response was quite excellent, and the organisers received nearly 2,000 entries. In the final phase of Moving Words, about 125 of these entries were selected for publication in a book, which was then launched during the Singapore Writers Festival. The editor was Alvin Pang, a well-known face in the Singapore literary scene. 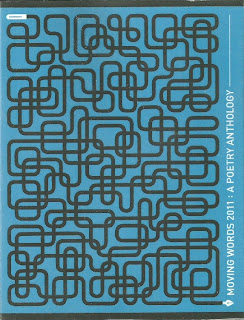 One interesting thing about such a book is that it shows you new, fresh writing by people whom you had never even heard of before. The vast majority of writers featured in the anthology have not previously published their own books nor won any literary award. Nevertheless the quality of writing remains decent, for these are, after all, the best 125 pieces culled from a much larger pool of nearly 2,000 entries.

As Moving Words was a multi-lingual project, the poems come in four languages - English, Chinese, Malay and Tamil. All the non-English poems in the book also come with an English translation. The editor You can order the book directly from the publisher here or from Select Books.

From the book, I offer a sample poem, written by one Gan See Siong, who is a lecturer at Temasek Polytechnic. It's a rather mischievous poem, with a particularly naughty ending.

"You like to enter me in the wee hours of morning
That part of yours in protective sheath
And go romping with me
Three to four times a week.

A gentle man you are not
For without warning you would spread me wide
To accommodate the full extent of you.

You strapped me up
With those dexterous fingers
So close I can see your grim determination
The even rise and fall of your chest.

And just like that
You would head me
Down the pleasure road
Growing all hot and hard in me.

If only you knew how I long for these sessions,
They are the reason why I even exist," said the pair of running shoes.

Is this a poem?

No wonder the students in Sin nowadays are so haywire.

Go and figure it.

Beautiful. Love it. Will definitely pass it on.

why you so like that wan? why so serious leh? It's end of the year festive period, you know? Relax a bit lah! I think it is very creative.

Totally enjoyed this poem and some of the others too; my personal favourite, Ma.Anbalagan's "Journey"!

If more poems are like this, more people would take to it.