One For The Scrapbook

Stephanie Yap is a sub-editor for the Life! section of the Straits Times. She was also one of the 12 writers invited to join the recent Ubin writing retreat.

Last week she wrote an article in Life! about the experience. I'm posting the article here, as a little souvenir from the trip.

ST Oct 29, 2009
Ubin for inspiration
No TV, no Internet, but plenty of creative energy when writers get together on a five-day island retreat

On a sweltering Monday afternoon, while the rest of Singapore was cooped up in air-conditioned offices battling food comas, a dozen of us were herded to a quiet offshore island. Among our number on the bumboat bound for Pulau Ubin were winners of the Singapore Literature Prize and other assorted literary awards, prolific authors with double-digit bibliographies, Singapore literary pioneers and one Straits Times journalist.

We were the guinea pigs of the first Catalyst Creative Writing Residential Retreat, organised by non-profit organisation The Literary Centre in collaboration with the British Council and supported by the National Arts Council. The pilot for what is intended to be a continuing series of writing retreats open to anyone interested, last week's camp was modelled on Britain's renowned Arvon Foundation creative writing courses.

But where Arvon's courses are held in the majestic Scottish highlands or the bucolic English countryside, this retreat saw us sequestered at a solar-powered Ubin chalet compound, beside a beach strewn with litter thrown up by the busy Johor Straits.

With no TV, Internet access or - gasp - air-conditioning, for five days we were freed from all distractions so that we could get cracking on the Great Singapore Novel. 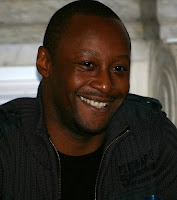 This will seem odd coming from a journalist, but one of the things the workshops taught me is how much you can actually write when facing a deadline.

During the workshops, conducted in an open-air pondok or hut, we were tasked to write short pieces based on various stimuli, ranging from something as intangible as a childhood memory to the physical prop of an empty chair placed in the middle of the pondok.

In one memorable exercise, we paired up and took turns walking around blindfolded so that we would be forced to experience our surroundings with our other senses. (We were kind to each other: Newland said that when he does the exercise with kids, they usually end up making the blindfolded ones fight each other.)

Though what we wrote was ostensibly fiction, naturally some personal details crept into our works, which is why we, the self-proclaimed Ubin 12, have this pledge: What happens on Ubin stays on Ubin.

In between our daily activities of writing, swatting mosquitoes and making illegal phone calls home, we were also expected to take turns cooking for the group.

You have not supped unless you have tasted instant noodles made by three poets and a novelist. My guess is that none of them will be coming out with a cookbook anytime soon.

Heheh, I was one of the three poets. To be fair, we were not cooking mere instant noodles. We were attempting to do mee goreng. It was disastrous.

And during the long afternoons, the scorching sun having dried up what little creative juices we had to begin with, we would sneak out of the compound to explore the rest of the island.

Salvation from each other's cooking came from the nearby village and its motley assortment of restaurants, including a seller of ice-cold Thai coconuts and a former opium den-turned-coffee shop.

The more adventurous among us even rented bicycles and ventured into the jungle, which holds enough histories, secrets and wild boar to fill several epic novels.

Once, three of us stumbled upon a Taoist shrine devoted to a German girl who died after World War I, when she fell into a quarry while fleeing the British soldiers who wanted to imprison her family.

Now a deity with the power to bestow 4-D numbers on her loyal worshippers, she is represented by a blonde Barbie doll in a glass case, who smiles beatifically amid offerings of pressed powder, face creams and lipsticks.

Another day, a group of us checked out Chek Jawa, one of Singapore's last wetlands. As planes from all over the world flew overhead on their descent into Changi Airport, we cast our eyes downwards and spotted jellyfish, mudskippers and fiddler crabs with monstrously giant claws which they wave to attract females and intimidate rivals.

But in truth, we did not even have to venture far from our beds to encounter wildlife. Back at the chalets, the compound was ruled by a pack of stray dogs, led by an alpha male and his favourite companion, a female who managed to coax chunks of our dinner from our plates, thanks to her heart-meltingly liquid eyes.

But it is the nights around the barbecue pit that I remember most fondly. With the sun down and a breeze coming in from the sea, we would stuff ourselves with roasted meat and alcohol, then sit around and read each other our stories.

In Singapore, few writers are full-time wordsmiths, most having to hold day jobs to make a living. Among us on the island were practitioners in the fields of law, finance, education, arts management and the media.

Some works were in a raw state, others already highly polished. But in the diversity of offerings, it was clear how much the Singapore literary scene has to offer, if only writers are given the time and opportunity to write.

At the ongoing Singapore Writers Festival, alongside a host of international and regional stars, I look forward to home-grown literature being celebrated in symposiums, readings and book launches.

But I am also grateful for programmes such as Catalyst, which recognise that before audiences can be grown, writers must be nurtured. And there is no better way to help them develop their craft than by giving them some space, time and good company.

Some of the participating writers will talk about their experiences at the retreat in The Creative Writing Experience at The Arts House, The Hall, on Saturday at 6pm. Admission is free.

I did go to the Arts House last Saturday evening, to do the talk, together with the other writers. A very decent-sized, interested crowd showed up and asked many questions. In fact we ran out of chairs.

That was interesting. Sounds like you had a great time.

Yeah ... It was quite a memorable experience.

I hear that while you guys went on a free trip, future participants will have to pay course fees. :(

Saw some pics of this on Facebook, MW. Looks like a cool place to go and figure life out.

It's definitely good at least for a day's worth of cycling.

>>In one memorable exercise, we paired up and took turns walking around blindfolded so that we would be forced to experience our surroundings with our other senses.<<

I'll bet that James Joyce and William Shakespeare didn't do shit like this.

These sort of new age writing voodoo are just good for getting money from various funding sources.

No amount of walking around blindfolded is going to make Ris Low into a great writer.

Market is OK. Economy worldwide is going to feel most of the pump priming next year. Consumption is seeing initial signs of improvement and hopefully will pick up from where the pump priming fades off towards end-10. Valuations are fair, but not expensive. Globally investors are still cashed up and corrections should be brief. It's still fashionable to sell scare stories. I'm not a believer.