What I Teach My Kids About Sex

I have two children. My daughter is five, and my son is seven. Both of them know about sex.

In fact, my son first learned about sex, when he was only in kindergarten. Since I've previously blogged about my son's kindergarten sexuality lesson, I won't say any more about it, except to provide the link to that old post. 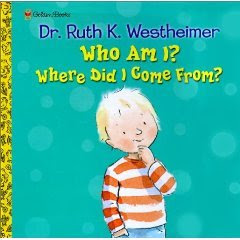 The book that I have used to teach my children about sex is entitled "Who Am I? Where Did I Come From?". It is written by Dr Ruth Westheimer, an 81-year-old sex therapist and grandmother of three.

As you might expect of any other children's book, the book has many bright colourful pictures and is written in simple language. A reasonably literate six-year-old should be able to read most of it on his own.

The book does contain various words and phrases which would not be in the average six-year-old child's vocabulary. So I think that it is best that a parent reads the book with his or her child. The words and phrases I am referring to include penis, vagina, having sex, making love, sperm and so on.

To give you a better sense of what the book is like, I'll give a few excerpts:

1. "Sex is a word that causes some people to become shy, to hide their feelings. But you're not bothered by such a little word, are you? Why don't you say it out loud right now: sex."

2. ".... so the man puts his penis inside the woman's vagina. This is called having sex. Having sex is also called making love, because the adults love each other very much."

3. "It feels very good, and mommies and daddies only do it in private, when they are alone."

4. "A woman's vagina is very special. The vagina is made to stretch and stretch, after the mommy pushes and pushes, until it gets wide enough for the baby's head to pop out."

Based on my own experiences, I think that talking to your children about sex when they are still quite young is probably a lot easier than waiting till they reach puberty. If you wait too long, they might have picked up too many misconceptions by then and it becomes difficult to explain things. Or worse, if you wait too long, then one day you might discover that they already know much more about sex than you.

When I talked to my little children about sex, they were curious and interested. They pointed at the pictures, asked questions and made comments. But they were not any more curious and interested in the topic of sex, than they would have been if I were talking to them about dinosaurs or outer space or the life cycle of a butterfly. To them, the most remarkable thing they learned from the Ruth Westheimer book was that a woman's vagina could actually stretch wide enough for something as large as a baby to get out of it.

As the years pass and my children grow older, there will of course be more occasions when I will have to talk to them about sex. It is nothing to be dreaded, or to feel awkward about. It's all just part of life - in fact, there would be no life, if there was no sex.

Will definitely check this book out. I too have 2 kids, ages 7 and 5. Thanks for the recommendation.

it's always an issue on WHEN is a good time to start children on sex education. Actually, starting at an age when they are NOT interested in sex might not be such a bad idea.

When they do get interested, it would be a topic that has already 'broken ice', and logically, they are thus more likely to talk to the parents.

Why wouldn't you? *bewildered look* Because it is.

Hi Mr Wang, honestly, I am a little concerned about the views expressed on some blogs - Solo Bear's for instance - about homosexuality. There seems to be an instinctive shift to primordial modes when this is concerned.

Thanks! I would start to teach my 5-yr old and 3-yr old straight away.
Thanks for sharing this experience and I agree with you 100% that we should do this, instead of waiting for school or classmates to teach our children.

Hah hah, my dad 'taught' me when I was about 5 I think. Me and my brother (2 years older) together. It was two years too early for me. Especially on account of the fact that in three minutes he filled my head with the stupidest misconceptions - wasn't until I was 17 and explored my first girlfriend that I cleared my head of his garbage. Which just goes to show, it's fine to think that teaching your kids early is okay, but only if you are sane. For those with too many hang-ups it would be best to leave it to an expert or to their own experience.

YA. People think that sex is a dirty topic and that by avoiding the topic our children will remain "clean", "innocent" and "pure". Honestly, it's a matter of time before the kids get exposed to it through friends, through pornography, through media, from internet to TV to magazines. Rather than let these mediums by their main and original source of information, why not pre-empt these influences by starting sex education earlier and teaching them the right thing? By laying the correct and proper foundations, kids are less susceptible to being influenced by distorted information on sex.

Some people are so naive to think that by not broaching this topic kids will never know. truth is kids have more than ample ways to learn through their own means, so we ought to start early and teach them. better have ourselves educate them than the internet.

""A woman's vagina is very special. The vagina is made to stretch and stretch, after the mommy pushes and pushes, until it gets wide enough for the baby's head to pop out.""

That is quite descriptive for female.

The male version ?
The male's genital is just like large earthworm without eyes that contract, harden and lengthen as needed for exploration and pleasure into female's cave.

Glad to hear! The more kids learn from their parents and not from the outside the better :)

i agree it should start young too. the more parents avoid the topic, the more curious children are and the more they will want to experiment.

I explained sex to my child (32yrs now) with the help of a book "Where Did I Come From" by Peter Mayle. Illustrations are great and book is available at Amazon.

Better to broach the subject with the children early, so that when they do re-explore the subject, hopefully, they'll recall "Papa/Mommy talked to me about this before... hmmm, better go ask them again"...

Thanks to Mr Wang and Anon (may 23, 11:26am) for letting us know there's such books.... Ape was still fretting over how to teach, when and what training aids to use :p

I love "Where Did I Come From" by Peter Mayle. My mum got it for me when I was seven and I read this same book to my children.

I love the way you teach ur children.